By 1865 the population of Union had grown to over one hundred inhabitants and forced David Bivens and Samuel Hannah to lay out a large tract of land, west of Main Street which became known as West Union.  Nine years later North Union came into existence on land that had once belonged to the original claim of homesteader Fred Nodine.  Union received its charter from the State of Oregon on October 19th 1878, and seven years later the first telephone system was installed.  It ran between the train depot and Dr. Drake's office uptown.  Union County was named after the town of Union.  The bustling town of Union began its decline when the county seat moved to La Grande in 1905.

In 1919 the businessmen of Union recognized the need to provide modern accommodations and dining facilities for motorists going through town on Highway 30, the main route of travel through Eastern Oregon.  The Union Hotel  was opened in 1921.  This imposing three-story brick building is the largest commercial structure on Union's Main Street.  The red brick walls are accented with white brick and the grand entrance features a wide central staircase leading to a broad covered porch that opens into an extensive lobby.  After its initial heyday, the hotel declined.  Restoration began in the 1990's and continues even today.  The Union Hotel is renowned for its beautiful theme rooms and excellent food. (6)

This single story bungalow was built in the 1920's by Thomas and Charles Adams.  The Adams brothers constructed a number of quality Union residences between 1910 and 1930. Today this home still has its original character (5)

This Mansard style house was built in 1904 by Abel Eaton,  The lowered roof-line erupting in gabled windows engulfs the upper story and, in effect, turns the attic into a second story.  The house contains six bedrooms, two baths and two parlors.  The interior wood and brick work of the home still shows the original craftsmanship.  The hanging staircase is an engineering marvel.  Mr. Eaton was a businessman involved in many areas, including freighting and ranching.  In 1898 he built one of the largest woolen mills in the states in the city of Union.  He was mayor of Union, a school board member and a Prohibitionist candidate for Governor.  Because Mr. Eaton did not trust banks, he built two vaults beneath the house, which were accessed by trapdoors, and paid his employees in cash (2).  This is a private residence-please do not disturb

Virginia-born Jeremiah Thomson moved west during the 1850's. serving as a government scout to help immigrants settle in Oregon.  In 1873 he built this beautiful home, a simple cottage with an ornate Renaissance Revival style octagon tower. (43).  This is a private residence-please do not disturb

The Union Drug Store building, built in 1903 by L.A. Wright, sits on the site of one of the earliest dwellings in Union.  Those first structures succumbed to fire except for the building used by JA Chapman, who had Union's first store.  The building is a good example of the 20th century commercial architecture.  Today enjoy the building expansion and newly constructed soda fountain (40) Union Main Street.

A blacksmith stand occupied this spot in the 1870's before the Wilson Brothers brick building was erected in the 1890s.  The Union Railroad offices were housed here until the line was abandoned in 1924. (37)

The Union National Bank began in 1910 and merged with the first National Bank in 1919.  The north addition to this building, the Oregon Trail Garage, was owned  by Thomas Baxter into the 1950's.  The buildings have served various commercial functions.  (35A) (35B)

Built in 1881 as the Benson Brothers Meat Packing Company, this building is one of the longest continuous use structure for the same type of business.  It was advertised in the 1880's and 90's as "Union's Meat Market".  The middle portion was a harness shop before 1900 and the south portion a millinery shop (31)

This Italianate commercial style building was built in 1870.  Wright is said to have operated Union's first bank out of this building, living in the small dwelling attached to the rear.  The site became a grocery and stationary store in 1884 and a small office was added about 1885.  Through the years it has housed a millinery shop, a photo shop, a cobbler and harness shop, a shoe repair shop, a carpentry shop, and a card and gift shop.  Today when you enter the double wood doors, you can walk into a charming pub that offers good food, beer and wine. (28)

William Roth built this commercial building in 188; it was the site of the First National Bank of Union  until 1952, when a more "Modern" bank was built up the street.  The second Story was originally used as the International Order of Odd Fellows Hall.  The one-story "annex" portion was built in 1882.  Sanborn Maps from the 1880's and 1890's indicate that this was used as a post office.  With it's distinguished sentimental arch windows and door openings, this brick building is an excellent example of Italianate commercial building.  In 1968 the Union County Museum Society began developing the building for exhibits.  Today this building is full of memories and artifacts of days gone by, housing the history of the City of Union as well as Union County.  Open May-October (26-27)

Union High School was constructed in 1911 and looks today much like it did when it opened, with towering columns as its main entry continuing to provide a look of elegance.  The building occupies land where the Union County Courthouse once stood. (25)

Originally the Methodist Church, the Little White Church is a single story vernacular Gothic style church built in 1873 by early Methodist settlers.  This is one of the oldest Church buildings remaining in Union.  The Church has a stone foundation, is clad in clapboard, and has steeply pitched gable roof.  The steeple and the bell tower were added in 1885.  The central entrance portico also has a gable roof. (23)

Union City Hall is on the record as being one of the smallest and oldest in Oregon.  The construction of City Hall was undertaken in earnest late in 1880's to provide a fitting place for business for the growing town, as well as a new city jail (housed in the northwest corner of the first floor.)  There were numerous construction delays, which resulted in the ultimate completion date not  in 1891 as inscription would suggest, but in the spring of 1892.  This structure also housed the fire hook and ladder truck and the hose cart after its completion.  The tower base, located on the northeast corner of the building, retains its simple cornice and originally housed the fire bell.  In the 1950's a single story garage addition was built to accommodate the growing fire department.  The tower base now is mounted with an electric fire siren system.  The City Hall proper has never been used for any other purposes. (22)

Levy Brothers General Store,  this one-story rectangular building built in 1870, has a stone foundation, volcanic tuff storefront and brick walls.  The storefront was originally Italianate with cast iron, but was changed around the turn of the 20th century.  Two original slender cast iron columns remain on either side of the recessed entrance.  The intact metal cornices topped at the corner with ball  finials.  Built by Aaron Sommer, this was the first brick building erected in Union (20).

The Masonic Lodge was built in 1898 on the property donated by John Burns, the proprietor of Union's first hardware store.  This prominent two-story structure is built with red brick volcanic tuff front.  Today, it is the Union Post Office. (19)

The Italianate commercial building was built in 1873; in 1877 an adjacent facility was built.  The north site comprised a general mercantile establishment called Foster Bridges & Company, which did business into the 1890s.  By 1900 this establishment became the Elk Saloon, and by 1910 this site was used as a moving picture theater.  Today the building house Hometown Hardware, Liquor Store and Espresso (17)

Built in 1920 by Leo Hanson, the Eagle Tavern has a stepped parapet and an altered store front.  It was operated as a tavern during most of its existence.  Today the building houses the Knitkaboob Knitting Shop. (14)

The Knights i\of Pythias Hall was built in the Italianate style in 1898.  This versatile building has been used as a lodge hall, office, a Japanese restaurant, and a Mercantile and Grocery.  The upper story was used as a dance hall until good TV reception arrived in Union, prompting the saying "Come, stumble and Fall and the KP Hall" (11)

The Wright and Davis Mercantile Building left, built in 1880, has a flat roof with a stepped parapet, The middle section, built in 1891, does not reflect its original style.  It had housed an electric/ plumbing store, a bowing alley, and auto, truck and farm machinery repair shop.  The Cock Brother Building, right, which is now the Union Market, was hoe of Cock Brother Furniture and Undertakers (8c), (88), *A)

Carnegie Library, in the summer of 1912, the City of Union received a letter with a postmark from Scotland.  It was from Andrew Carnegie, and in the letter the gentlemen offered to give the City $5,500 to build a library.  With the money, the City let a contract to build a brick building and construct a levee along Catherine Creek for protection,  Andrew Carnegie requested only two things for his $5,500; that his name be displayed on the front of the building, and that it be noted at the library was a gift from him.  It is the only Carnegie library in Oregon hat has not changed from its historical structure and is still being used as a library. (7B)

The Union City Park,  the land for the Historic City Park was donated by Samual and Ester Pursel in 1917 (7A)

The buildings featured in the original brochure are only a few of the buildings of interest in Union and not all are located on Main Street.  Many buildings have numbered cards in their windows corresponding  to the blue circles number sin the original brochure, and proprietors can provide more information about their history than will fit in their brief introduction int Historical Union Oregon.  Following the description of the buildings in this pamphlet is a number parenthesis, i.e. (7A).  This number refers to a classification number assigned to the building by the National Register of Histrionic Places (US Department of the Interior-National Park Service).

"Thanks to Sandra Patterson and Laura Dodds at City Hall, the Union County Museum and Anderson Perry & Associates, Inc. for their assistance." 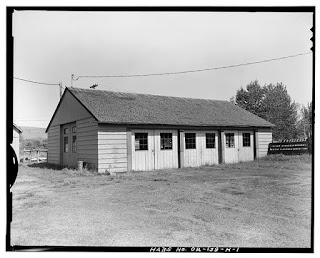